Shipwright Robin Benjamin says modern, thin teak decks need lots of regular care, and so it’s vital to follow his advice on how to keep them looking good. 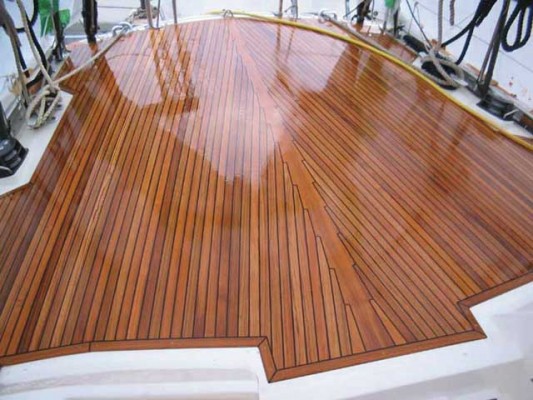 In the last 15 years I have worked on more teak decks than I care to remember, writes Robin Benjamin: I think I’ve seen every problem that exists. What you have to know straight away is that, like anything, teak decks need looking after. If you take care of your decks they may last 20 years or more, if you don’t you’ll be appalled at how awful they look after only five. Because solid teak decks have been the norm for hundreds of years they have understandably earned a serious reputation for longevity. Today’s teak decks are not the same thing at all.

In many cases modern teak decks are little more than a quick way for the manufacturer to up the ‘class’ of their product. Many are poorly fitted, the wood is too thin and the caulking gap too narrow. Because of the minimal amount of wood involved the best plug on the deck might only be 3mm deep. Likewise, the caulking, unless of adequate depth and width, will not remain glued as the wood moves. However, all these problems would amount to little if folk took care of their teak decks. The most important advice is to wash the deck every week but few people can spare the time. It’s quite simple however: if you don’t wash your deck regularly it will soon go grey and dirty. 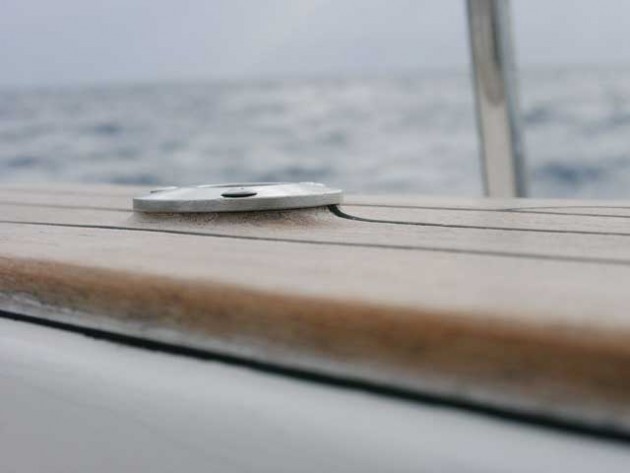 I’ve seen it done: the owner is standing there, his trouser legs rolled up, his knees red. True, his deck looks great… from the pontoon. But if you look carefully you’ll see grooves in the planks where the softer areas of grain have simply vanished. This is how it starts. Consider that you began with a lovely smooth surface, like a CD for example. After scrubbing it looks more like an LP record, but worse, much worse. Imagine now how quickly the ‘peaks’ will wear down as you walk on them. Of course it doesn’t end here, this is only the beginning.

To keep your deck clean there is only one way, and that is a gentle wash with nothing more violent than a light detergent and a large sponge or very soft brush. If you do this regularly you will not wear down the teak, but you will wash off the dirt before it gets ingrained. Dirt contributes to the wear of a teak deck. If this approach doesn’t work then you can try oxalic acid. Dissolve some crystals in warm water, do not breathe the vapours and make sure you wear gloves. It burns. Rinse well. Oxalic acid should not harm anything on the boat except your skin. There are plenty of products that do the same thing but cost a lot more. If acid doesn’t bring back the colour then there’s only one thing left to do if you want a lovely looking teak deck, and that is to sand it. But if you want my advice: continue to wash it carefully and often, with soap, and live with the deck not looking its best.

For some reason no one listens to me. I gladly advise people on how to look after their decks for free, even if it means I don’t get any work. It’s better for everyone, except me, that you take my advice. Yet despite this I still see people scrubbing their teak. I shake my head in wonder. Did I not explain what would happen if they scrubbed? ‘But it looks so great!’ they say. ‘So what’s the problem?’ The problem is that the next time they see their decks they will look grey and dirty again. The only difference will be that there is less teak than there was before. If your feet don’t wear down the peaks then they’ll fill up with dirt, making it look even worse. There’s only one way to get it out – more scrubbing. This time you’ll have to scrub harder to see a result. Can you see what’s happening? There will come a point soon when you decide the decks are looking pretty rough and need a good sanding. 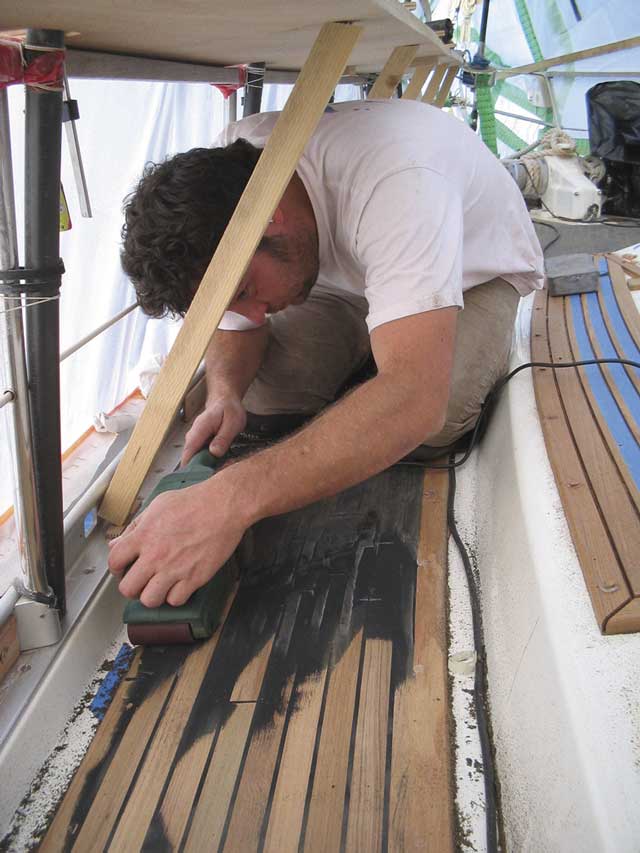 Boatyards are very keen to do this work for you and why not? Next time you see the boat it will look great and they know you’ll be back, because soon the caulking will start to roll out in long spaghetti-like strips and the plugs will fall out, exposing the screws and making water ingress all the more likely.
Now you’ve really got a problem. The plugs are not too much trouble but there will be hundreds to do. The real problem is the caulking. Just because some of it comes out really easily does not mean that it will all be like that. No, some of it will be sticking just like the manufacturer intended. You can make a special scraper to remove it but inevitably you will slip, damage areas and, even worse, you will enlarge the groove. If you’re really lucky you might be able to use a router for about 35% of the deck, but routers are vicious and it’s all too easy to make a mistake. Even a small enlargement of the slot will look terrible. Not only that but you’ll need a curved guide to run the router along for each slot. This takes ages. Bad enough if you’re doing it yourself, but it’s unbelievable if you’re paying a yard. Specialist tools exist but they are hideously expensive and it’s only the specialist yards that are likely to have them. Unfortunately the yard will be charging by the hour and there’s always a lot of work on any teak deck.

So what are the options now that your deck is worn out? You can’t just remove it, because underneath it will be horrid. If it was laid properly in the first place they will have keyed in the glued surface and that means taking to it with a grinder on a plastic boat. And you’ll still have to cover the decks to hide the mess.
So I hope you can see that I’m advocating care and prevention for your lovely teak deck. To just leave it uncared for is an outrageous waste of a precious resource.

If that isn’t enough to make you care for your deck, then consider the cost of replacement. Teak costs approximately £3,000 a cubic metre. But you’ll need a lot more than you think, because just cutting down a big plank to size wastes a hideous amount of wood. The cost of the teak is a large part of the final bill. Basically you can quadruple the price of the teak to take into account the cost of first measuring and photographing the original deck to ensure everything fits properly, the cleaning up of the surface underneath and finally replacing the wood. To do the job properly you may have to remove the chain plates and that means dropping the mast and completely readjusting it afterwards. Not only that, but all those deck fittings that haven’t been touched for years will need to be removed. And don’t be surprised if many of the bolts are hell to get out or break in the process. It’s possible that some of the bolts were made specially or have been glassed over. You’ll need somewhere to do all this. Perhaps it’s possible to make a good cover but even this adds to the cost. The alternative is to put the boat in a shed somewhere. Anything is possible but it always costs. Replacing a teak deck is a massive job. To replace the decks on a 9m (30ft) boat is six weeks’ work – three months for a 15m (50-footer). We are talking about many thousands of pounds and your boat out of action for a while.

There are other considerations before you decide on a teak deck. They weigh more: the caulking is surprisingly heavy, not to mention the wood and the thousands of screws. Perhaps what worries me most about laid decks on glassfibre boats is that you have to make thousands of holes in an otherwise perfectly waterproof surface to hold the deck down. Many fibreglass boats’ decks are balsa cored, that is to say, the deck is made of two layers of fibreglass with a layer of balsa wood in between. Balsa wood will not last long if it gets wet, yet this strikes me as very likely. The law of averages suggests that if you make 2,000 holes in a deck the chances of them all staying waterproof for years on end is pretty slim. What happens when the balsa has rotted away? I just don’t think making thousands of holes in a deck is wise. It is possible to lay a teak deck without screws, but it takes longer and therefore costs more.

So let’s sum up and cover up
On the one hand I am thankful for owners and teak decks since they allow me the life I lead, but on the other I am very sad at the waste of it all. People could save themselves a lot of time, inconvenience and money if they just took care of their decks. And for some reason no one wants to spend money on ‘posh’ covers to protect their boat. Covers are initially expensive but they will repay their cost several times over. Not only will you not be required to replace your decks but you’ll be able to sell your boat for more because it has obviously been well looked after. It’s not just teak decks that will benefit from protection – plastic windows, instruments and gel coat will all last longer if kept out of the sun, wind and rain. The Grand Canyon was created by erosion from the elements. When you think like that, surely you can understand why I recommend covering up.

I can only do my bit. I can’t change the world and I can’t change fashion, but I hope I can slow down the damage by telling the truth. So now you know. And remember: don’t scrub!

The good, the bad and the ugly 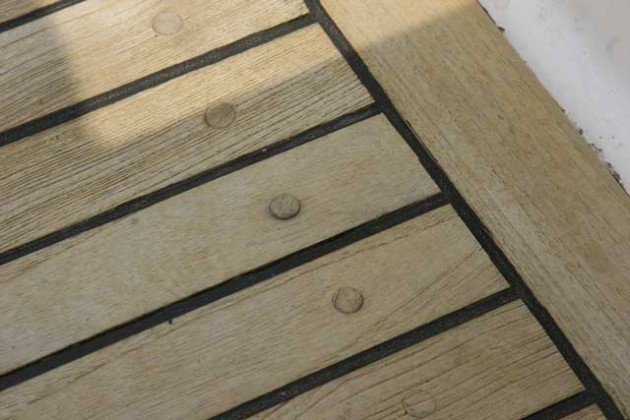 With decking that is very thin, the plugs over the fastenings are even thinner and can lift if the glue fail 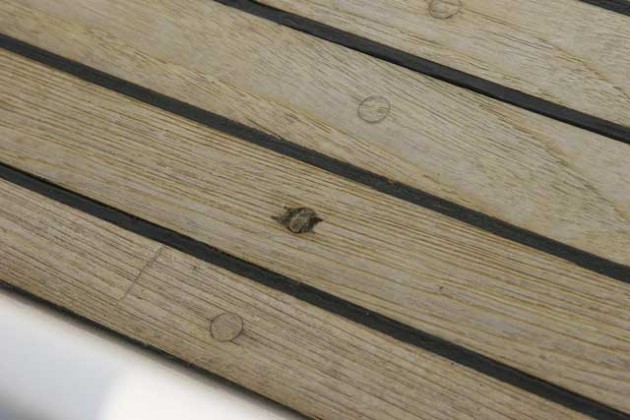 This plug seems to have a problem. It could be loose and holding moisture, or the fastening is corroding 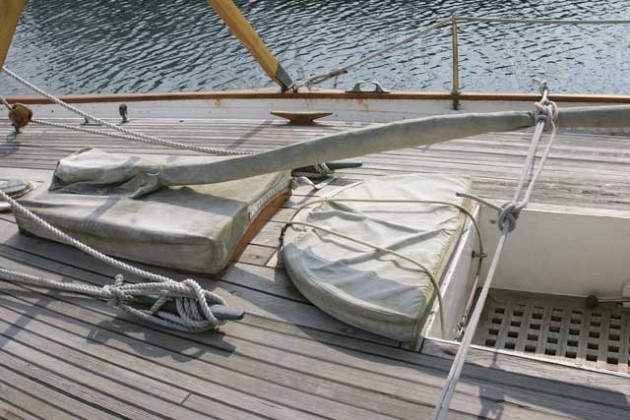 Covers over vulnerable varnished work make sense, but a complete cover will also protect the deck 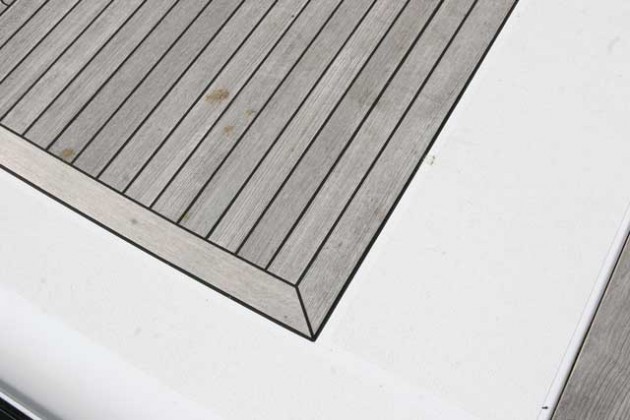 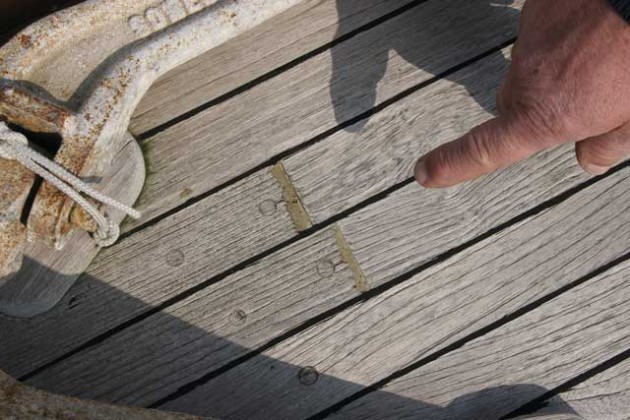 Even old-style decks can have their problems. Here, to avoid butt joints, the planks had been scarfed together and, after many years, the feathered edge started to lift. The owner simply fixed it with epoxy 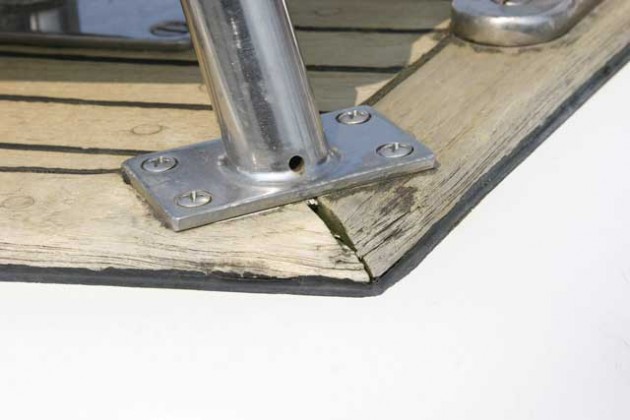 This article was originally published in the June 2007 issue of PBO.